Due to increased demand for wheel repair services, Diamond Alloy Technicians have moved to bigger commercial premises in Adlington.

Over the past year we have seen a 200% increase in sales, are now repairing over 700 wheels per month, we have taken on more staff, and now have 8 technicians – including four who were previously unemployed.

The move to new premises follows an earlier refit of its previous premises on the same industrial park over the summer, including the installation of a larger oven. Just a few short months later it became clear that bigger premises would be needed to keep up with demand.

After moving to the new custom built premises we had the pleasure of having Sir Lindsay Hoyle MP visit our new unit!

Chairman Pete Radcliffe says: “Over the summer we invested in new machinery and increased efficiency at our existing unit but it was clear that with the level of demand being received we were running out of space to store and process the wheels being repaired.

“Along with the need for new premises, we’re really proud about the skilled employment opportunities we are offering to local people. There’s so much talent around but it often seems like young people aren’t able to realise their potential because there’s only limited choices on offer. What we provide is unique, so we’ve had to develop our own training programme and it’s worked really well for us – our apprentice technicians are excellent and keen to learn new skills.”

Mr Radcliffe adds: “We’ve disrupted the market with a service that is considerably better than anything previously available and we intend to continue to develop DA Techs with innovative new services to deliver what the market wants.”

Apprentice technician Joe Westhead was previously stacking shelves in a supermarket before joining DA Techs in August. Commenting on his new role, Joe said: “I love working as part of a team, learning new skills and knowledge but most importantly it’s given me confidence and a career to build, which is so different from working in a basic level supermarket job.” 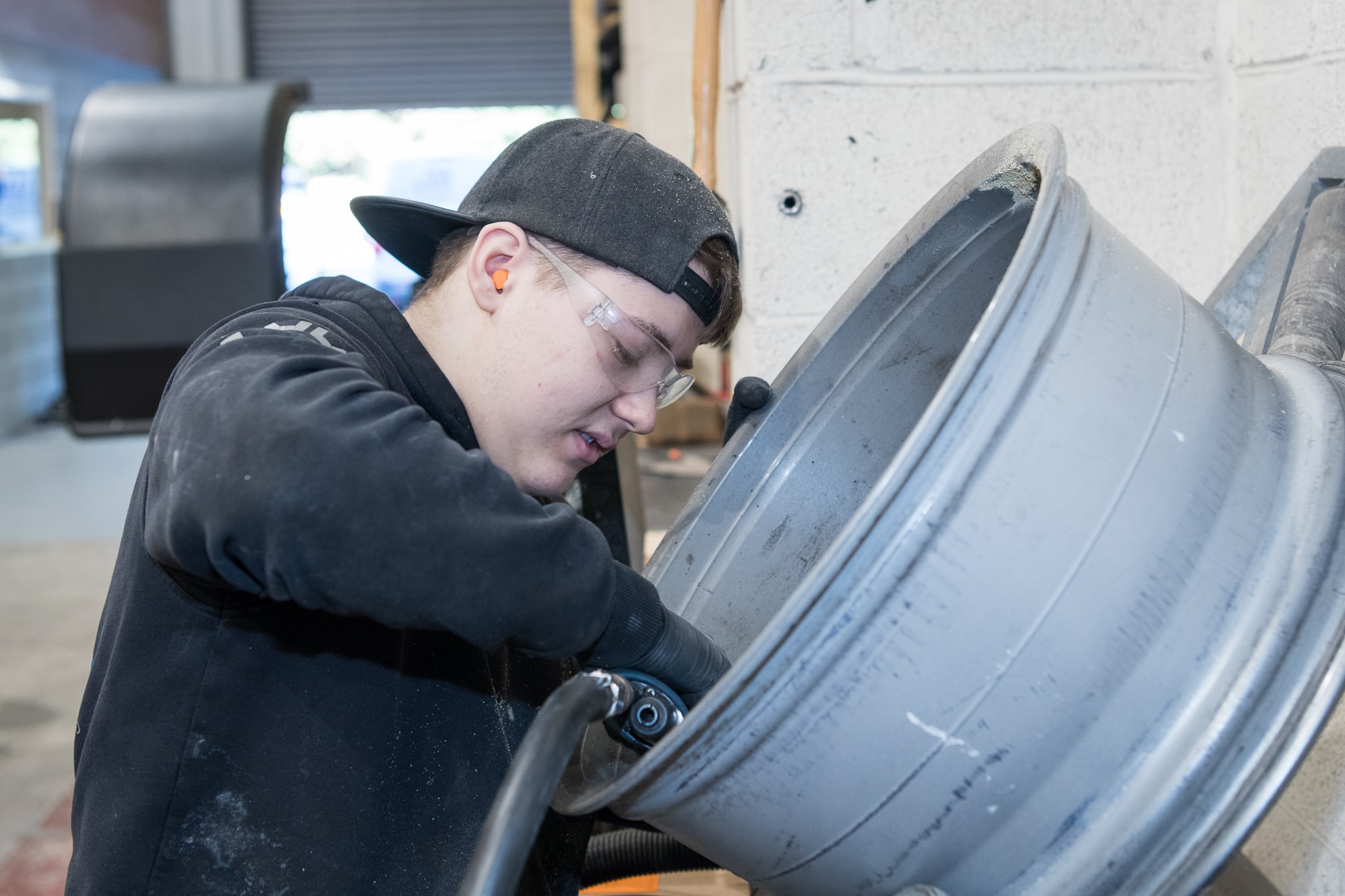 Along with moving to the new unit in December 2018, we will be putting another mobile alloy repair vehicle on the road in April. The second van will deal with repairs to ordinary alloy wheels – a service we had not originally planned to offer but have added to our portfolio due to demand from both private clients who bring their wheels for repair to the unit and car dealers who need volume repairs.

Our mobile diamond alloy repair service continues to be fully booked out – with car dealers in Preston, Blackpool, Blackburn, Chorley, Bolton, Rochdale, Bury, Colne, Warrington, Widnes and Winsford now among those across the North West using the service. The innovative mobile service is highly prized by dealers as it means they can turn around vehicles to prospective buyers much more quickly, saving them thousands of pounds over the course of a year. For example, one large car supermarket has reduced the turnaround time for repairs by 75% from 4 days down to one.

See our team in action!

The mobile repair service was the brainchild of co-owners and school friends Jamie Baxter, former Sales Manager at BMW Williams Bolton, and Phil Barnard, who spotted the potential to install the lighter repair lathe in a van and offer a mobile diamond cut alloy repair service to car dealers such as the one where Jamie used to work. It took six months of planning to work out how to configure a Mercedes Sprinter van with everything that was needed – not just the diamond cutting lathe, but spray booth, heat lamps, extraction and its own power – with the first van finally on the road in February 2017.